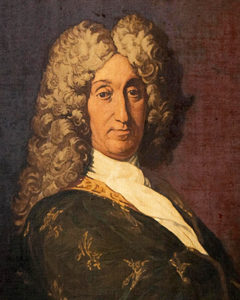 Baron Christoph von Graffenried, founder of New Bern, was born in 1661 in Bern, Switzerland, and studied at the University of Heidelberg and the University of Leydon. In 1708, he relinquished his office as a minor government official because he wanted to find fortune in America. Franz Ludwig Michel and Graffenried joined the Ritter Company and, with help from the Lords Proprietors of Carolina, made plans to take immigrants from Switzerland to the new colony of North Carolina.

Graffenried’s political abilities served him well when he convinced the Ritter Company to broaden its original plans and include Palatines in the voyage. The Palatines had been displaced from their homes in Germany because of their Protestant religious beliefs. Settlers viewed immigration to the New World as appealing because the Lords Proprietors offered them advantageous terms of healthy climate and unrivaled fertile soil.

In 1710 ninety-two Palatine families (about 650 people) voyaged to North Carolina to begin settling the land that Graffenried had secured. In September of that same year, Graffenried traveled to the colony with 156 Swiss settlers. Surveyor and explorer John Lawson accompanied the party to New Bern and laid out the town.

Once the settlers arrived, they realized there had no protection against the Tuscarora Indians, who were fiercely protective of their land and felt the settlers were invading their territory. Many of the Swiss settlers were massacred. The Indians captured Graffenried and Lawson. Graffenreid was released but Lawson was burned at the stake. Once Graffenried was returned by the Indians, he traveled to Virginia to ask the Governor for military aid against the Tuscarora Indians. After failing to receive help and realizing he was out of money, he decided to go back to Switzerland where he spent the rest of his life.