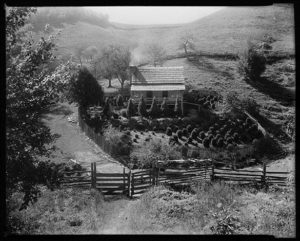 Pioneering North Carolina photographer Bayard Wootten (1875-1959) lived in the same house on East Front Street in New Bern for the years 1875-1892, 1901-1928, and 1954-1959. She was named for her grandmother, New Bern writer and editor Mary Bayard Clarke. Bayard Wootten’s father Rufus Morgan, also a noted photographer, moved to California in 1879 with the intention of bringing his family out, but he died in 1880. Her mother, who married George Moulton in 1886, supported the children by painting decorations on hats and fans. Bayard attended present-day University of North Carolina at Greensboro for a year and then taught school in Georgia, where she married Charles Wootten in 1897. They divorced in 1901. Wootten returned to the work that her mother had followed, commercial art, and designed the first trademark for Caleb Bradham’s Pepsi-Cola. Around 1904 she shifted from artwork to photography. She gained experience at Camp Glenn, the National Guard installation in Morehead City, where she was hired as photographer and director of publicity. Her business flourished and her half-brother George Moulton joined her full-time.

In 1910 Wootten protested sexual discrimination in a professional publication and later took part in suffrage demonstrations. As a pioneer in the field Wootten achieved numerous firsts, often endangering her safety to get the picture. She flew over New Bern in 1919 to get early aerial views, photographed Linville Falls after being lowered over a cliff by a rope, and late in life, shot a mill from atop a water tower. Wootten and her staff, based in Chapel Hill from 1928 to 1954, traveled across the state. Her photographs illustrate many books, among them Cabins in the Laurel (1935) and Old Homes and Gardens in North Carolina (1939). Her work drew favorable comments at a Boston exhibition in 1932 and was subsequently exhibited in nine states. In 1954, with her eyesight and hearing failing, she returned to her birthplace where she died five years later.