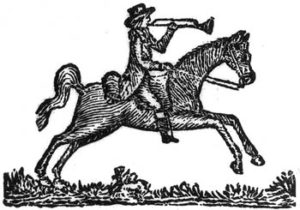 The first post road in North Carolina was constructed in 1738-1739, extending a road network that ran from Philadelphia to Williamsburg. In April 1738, the Virginia Gazette reported that Virginia Governor Alexander Spotswood had ordered a road to be cut from Williamsburg to Edenton in accordance with the wishes of North Carolina’s post-master Abraham Blacknall.

A year later, in April 1739, the South Carolina Gazette recorded the establishment of a postal route from Charleston to “Georgetown, Cape Fear, Edenton, and so through the Northern Colonies” that would run on the 20th day of every month. In May 1739, the reported that the road running from Edenton to Charleston had been finished. The following month the paper noted that a continuous route was then in existence from Boston to Charleston.

The exact route of the road through North Carolina remains something of a mystery. However, it is known to have passed near or through the present-day towns of Corapeake, Edenton, Bath, New Bern, and Belgrade, and through Brunswick County before entering South Carolina. The route apparently fell into disrepair in the 1740s and 1750s. As the British colonies were drawn into the War of Jenkins’s Ear and the French and Indian War, colonial legislatures could scarcely afford to support the post road. Furthermore, oftentimes it was quicker and more efficient to simply mail letters by ship for delivery along the coastal trading routes.

In 1765, when William Tryon succeeded Arthur Dobbs as royal governor, North Carolina was the only colony that did not have an official post system, leaving a gap in communications between the northern colonies, South Carolina, and Georgia. Tryon attempted to ameliorate the situation by funding the rebuilding and maintenance of the route, but by 1774 the post road was only partially operable. That same year the first east-west postal route in North Carolina was established between Wilmington and Cross Creek.