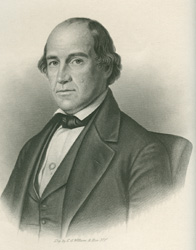 George Edmund Badger, a native of Craven County, served in state and national office during his career, including a stint as Secretary of the Navy in 1841. He was as a U.S. Senator between 1846 and 1855, a North Carolina Superior Court Justice, and a representative in the Secession Congress in 1861. Badger is remembered for his staunch nationalism. Following his retirement from the Senate in 1855, Badger returned to his home in Raleigh where he served as county magistrate and practiced law until his death in 1866.

Born in New Bern in 1795, George E. Badger was educated locally and attended Yale University in 1810. He left Yale in 1812 due to financial hardship and returned to New Bern, and studied law under John Stanly, earning his license in 1815. In 1816, at twenty-one years of age, Badger was elected to represent New Bern in the North Carolina House of Commons. Following his term in office, Badge in 1820 was appointed a justice to the North Carolina Superior Court; at twenty-five he was the youngest justice ever to take office. Badger served on the court until 1825 when he resigned and moved to Raleigh to practice law.

Badger was a strong supporter of Andrew Jackson during the campaign of 1828, but broke away from Jackson and the Democrats over the recharter of the national bank. Joining the new Whig Party, Badger became actively involved in the 1840 presidential election, supporting William Henry Harrison. Upon Harrison’s election to office, Badger was appointed Secretary of the Navy, a position he held only until September 1841. With Harrison’s death, Zachary Tyler gained the presidency, and his split from the Whig Party and its ideals of a national bank and strong central government led to the resignation of the majority of Harrison’s Cabinet, including Badger. Despite his short term, he was a well received and well-respected Secretary of the Navy.

Badger returned to his law practice until 1846, when he was elected by the North Carolina legislature to fill the vacant, unfinished term of William H. Haywood, Jr. He served in the Senate until 1855 after being re elected to a full term in 1848. In March 1855, upon Badger’s retirement from the Senate, he was awarded an unusual accolade of recognition in appreciation of “his uniform courtesy . . . and valuable services during his long and distinguished careers.” During his time in the Senate, he maintained a strong Federalist stance, supporting internal reforms and a strong central government.
In 1855 Badger again returned to Raleigh and his law practice, acting as county magistrate until 1861. He maintained a strongly Unionist stance, stemming from his belief in a strong federal government. But with Lincoln’s call for troops, Badger became a secessionist, arguing carefully for the right of rebellion, as opposed to the right of secession from the Union. He died on May 11, 1866, and was buried in Oakwood Cemetery in Raleigh. Although his homes in New Bern and Raleigh no longer stand, Badger’s law office remains. Later used by James Iredell, Governor of North Carolina, the office, once located at the corner of Dawson and Edenton Streets, was relocated to the Mordecai Historic Park in 1973, where it can be seen today.