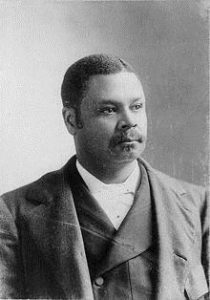 George Henry White was the fourth of four African Americans to represent North Carolina’s Second District in the United States House of Representatives in the nineteenth century. He was born near Rosindale in Bladen County on December 18, 1852. His father was Wiley F. White and Mary White is the woman that George considered his mother.

The highway historical marker for White approved in 1976 indicates that he was born into slavery, as was believed at that time. However, Benjamin R. Justesen’s 2001 biography of White relates details that tend to refute the statement. George H. White was raised as a free black, as was his father Wiley. However there is some indication that George, like his older brother John may have been born to a slave woman that Wiley White never married. If that is the case, Wiley and Mary White would have had to purchase the boys. Regardless of his circumstances of birth, George White attended public schools and studied under D. P. Allen, president of the Whiten Normal School in Lumberton. White graduated from Howard University in 1877. He initially held principalships at two New Bern schools, while at the same time studying law under Judge William J. Clarke. White obtained his license to practice law in North Carolina in 1879.

George H. White launched his political career in 1881, when he was elected from Craven to serve in the North Carolina House of Representatives. In 1885 he served in the State Senate. The following year White was elected to a four-year term as district solicitor for the Second Judicial District. White moved to Tarboro in order to be eligible to run for office in what was known as the “Black Second” Congressional District. The district had a significant black population and three times had elected African-Americans to Congress. White was elected to Congress in 1896 and 1898. At the time, he was the only black representative and in that capacity he introduced the first bill condemning lynching. He was attentive to local issues and appointed many blacks in his district to federal positions.

Most noteworthy in White’s Congressional career was his farewell speech, in which he stated his belief that, referring to service by blacks in the national legislature, “Phoenix-like he will rise up some day and come again.” After completing his term in 1901, as the racial climate in the South was changing, White and his family moved to Washington, D.C., and later to Philadelphia, where he founded to first black-run bank. He established a black community in Cape May County, New Jersey, called Whitesboro. In 1879 George White married Fannie B. Randolph, who bore him a daughter. He married Nancy Scott in 1882, but she died within the year. In 1886 he married Cora Lena Cherry, daughter of a Tarboro politician. The couple had two children. White married one more time, to a much younger woman, Ellen Avant MacDonald, in 1915. George White died December 28, 1918, and is buried in Eden Cemetery in Philadelphia.