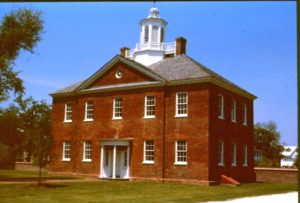 The earliest government effort to aid education in North Carolina was in Edenton in 1745, where town commissioners were empowered to build a schoolhouse. However, there is no evidence that it was ever built. (An academy in Edenton was eventually established in 1770.) Other efforts to aid education were pressed either by government or members of the Assembly in 1749, 1752, 1759, and 1764, but failed due to lack of interest.

The New Bern Academy, founded in 1764 and incorporated in 1766, was described by Governor William Tryon as “the first (school) established in this province by legislative authority.” The 1766 act provided that a special public tax be placed on liquor for its support. Although a few children of parents who could not afford to pay were allowed to attend free of charge, most paid tuition. Thus, the academy cannot correctly be said to be the state’s “first public school.” Edgar W. Knight has written of the New Bern Academy: “This was the first school or academy incorporated in North Carolina and this was the first law of any great importance passed in the colony on the subject of education.”

Thomas Tomlinson was hired as headmaster by trustee James Reed, Rector of the Anglican Church. Beginning in 1768 the colonial Assembly used the school as a meeting place. A new set of trustees appointed in 1784 included Richard Caswell, Abner Nash, John Wright Stanly, William Blount, Richard Dobbs Spaight, and other prominent North Carolinians. Likewise, many of the state’s leaders were educated in the school, among them William Gaston, Richard Dobbs Spaight Jr., and Francis L. Hawks.

A new building, designed perhaps by James Coor or William Nichols, was begun in 1806 and completed in 1810. The structure was seized and used as a Union hospital during the occupation of New Bern, 1862-1865. The academy ceased to exist with its incorporation into the New Bern city school system in 1899. However, the building was used by the public schools until 1972. Today it is administered by Tryon Palace and Gardens.