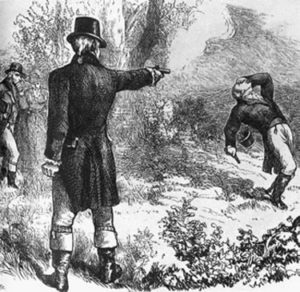 On September 5, 1802, two prominent North Carolina politicians resolved to settle a conflict that had played out before the public. John Stanly, incumbent congressman, and Richard Dobbs Spaight, former governor and congressman, met at dusk behind the old Masonic Lodge on the outskirts of New Bern in order to duel. The political adversaries had traded jibes for more than two years, with increased frequency in the weeks prior to the duel. Spaight arrived with Edward Pasteur as second and Stanly, with Edward Graham. Three volleys were fired, during which exchange Stanly’s coat was pierced with a gunshot. Although bystanders urged that the matter be considered settled, Pasteur insisted that it continue. In the following round, Stanly delivered a shot that struck Spaight in his right side.

Spaight was taken to his home in New Bern where he died the following day, leaving a wife and small children. In response to the high-profile duel, the General Assembly passed an anti-dueling law just two months later. After his unsuccessful petition for a pardon to the legislature in 1803, John Stanly contacted the governor. Governor Benjamin Williams, believing that the challenge was unavoidable and that it had been a matter of honor, granted Stanly’s pardon. Stanly went on to have a successful political career.

The permissive nature of Stanly’s pardon demonstrates why North Carolina’s anti-dueling act was ultimately ineffective. Men who were passionate enough to duel believed that they had a reasonable chance at being pardoned, since they were defending their honor. If they did not wish to risk the law, duelists could step over the state line to South Carolina, where dueling was legal, as was the case in the Robert B. Vance and Samuel P. Carson duel in 1827.