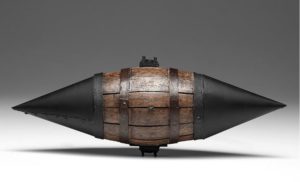 The eldest, Gabriel J. Rains (1803-1881) served a long stint in the “Old Army” and was assigned to the Indian Territory in 1827, in time fighting the Seminoles and in the Mexican War. He had risen to lieutenant colonel by the time he resigned in July 1861 to accept Jefferson Davis’s offer to be a brigadier general. Posted to Yorktown, Virginia, he developed there a “Sub-Terra Shell” or time bomb used to horrific effect. His employment of land mines early in the war outraged military men on both sides, who viewed it as a particularly horrendous, inhuman form of warfare. In 1864 he directed the use of a time bomb that exploded at City Point, Virginia, causing four million dollars in damage to a federal ammunition depot and narrowly missing the party of Gen. Ulysses S. Grant.

That same year Gabriel Rains was appointed superintendent of the Torpedo Bureau. By the end of the war there was less compunction and Rains’s mines and torpedoes were used with regularity. A recent writer has concluded that Rains played a “major role in revolutionizing the science of combat.” After the war he resided in Augusta, Georgia, and worked for a fertilizer company while continuing to invent and publish articles on torpedo technology. He died in 1881 in Aiken, South Carolina.

George W. Rains (1817-1898), like his brother, served in the Mexican War. In 1856 he resigned from the Army to assume the presidency of Washington Iron Works in Newburgh, New York. In 1861 Rains joined the Confederacy and organized the effort to build the powder works at Augusta, Georgia. The Confederacy, desperately short on gunpowder at the war’s outset, had need for a strong, home-based gunpowder industry. Colonel Rains, superintendent of the works, visited mines to find the necessary saltpeter and secured supplies from throughout the southern states. Workers were brought in from the captured U.S. arsenal at Fayetteville. Though never fully completed, the works did operate for over three years and produced 2,750,000 pounds of gunpowder.

Today a cotton mill along the Savannah River, only an obelisk-like chimney remains from what was said at the time to be the world’s largest powder factory. Rain’s promotion late in the war to brigadier general was never confirmed. He later became a chemistry professor at Augusta’s Medical College of Georgia. Historian Maurice Melton has concluded: “Rains showed a genius for getting things done, and to him—almost alone—is due credit for keeping the guns firing.” He died at Newburgh, New York.